Looking for some way to make sense of the Troy Davis execution, I thought over and over again about the fact that he refused his last meal. Not that his act of refusal was more important than any other aspect of this case, but in it - his refusal that is, I was hoping to find some solace. I needed some meaning, philosophical or otherwise, that I could share with my son to help him, heck to help both of us deal with the execution of Mr. Troy Davis--an act that left us both speechless.

I was not sure if Mr. Davis would have refused his last meal had he known that unlike in 2008, he would not be granted clemency. Either way, there seemed to be more to it than met the eye. Was it an act of power, a demonstration of faith, a snub? Maybe it was all of the above. Around the dinner tables of his executioners, however, Davis' name would likely be no more than a bump in their conversation. "We executed that Davis boy tonight, honey, would you "Pass the Peas? Then Mr. Davis' name would probably drift off of their lips until the next execution hit the paper.  I decided to look to James Brown for more prophetic song titles to help sooth my angst, and his music was on point. James Brown helped me Get on the Good Foot.

The traditional last meal offered to inmates on death row (Texas last week abolished the last meal tradition), has been in existence since pre-modern Europe. The last meal, considered to have roots in superstition, was a symbolic gesture- more for the benefit of the executioners than the soon to be executed prisoner himself. Accepting the meal typically meant that the prisoner made peace with the host, and willingly participated in a symbolic oath of truce passing on all vengeance. In other words, in accepting the last meal the condemned was believed to forgive the executioner, the judge, and witness(es).

The last meal ritual was also supposed to prevent the condemned from returning as a ghost who would haunt those responsible for their killing. Well, I hope Georgia has Ghost Busters on speed dial. 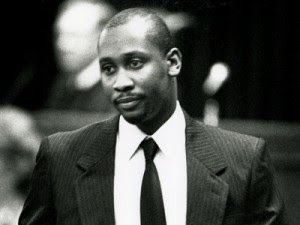 When they decided to execute Troy Davis, people all over the world lifted their voices and picked up their pens like Mama used to pick up her Lickin Stick and gave Georgia one good whoopin. The opposition to  the execution of Troy Davis crosses gender, racial and generational lines. It spans beyond this the nation borders to foreign lands. Mr. Davis' death will not be another notch in Georgia's capital punishment belt. His cause is now much bigger than his questionable guilt.

When Mr. Davis was executed you could have knocked me over with a feather. I had to look around to make sure I was still Living in America. People from all walks of life begged Georgia "Please, Please, Please," Georgia, don't do it. Witness after witness recanted their testimony, and the world watched in disbelief. When it came close to the time of his execution, groups banned together saying in light of all of the evidence you wouldn't dare execute a potentially innocent men, would you? Georgia's reply?   Try Me.

So, despite protests in America, Paris and London, petitions signed by hundreds of thousands and pleas from Bishop and Nobel Laureate Desmond Tutu, former US President Jimmy Carter and The Pope himself, at 11:08pm on September 21, 2011 Troy Davis was put to death.

This Is A Man's World, but not for just any man. Lady Justice still sneaks a biased peek through her blindfold in the application of constitutional rights for some men.

As for Mr. Davis, there was new evidence but he would not get a new trial. No lie detector test. No clemency. Nothing. Prepped for the lethal injection, in his final words Mr. Davis again asserted his innocence from his death bed. Yes, Troy Davis Said it Loud, then he closed his eyes for the last time, black and proud, forgiving those who put him to death.

Georgia, like James Brown, I Got The Feeling, your death penalty days are soon coming to an end. Although you think you are Superbad and can do whatever you like, I for one am Gonna Have A Funky Good Time making sure that Troy Davis' death was not in vain. It took me a few days to get over it, but today I can see the silver lining in this cloud and I Feel Good. I spoke with my friends and my son- who was really distraught over your actions- and I know what I have to do, Get Up Get Into It and Get Involved. Here are just a few things I am going to do, and I welcome anyone who wants to change the environment of America for our youth to join me or any cause to make Troy Davis' death a catalyst for positive change.

1. I'm working with Susan Taylor to advocate for mentors for at risk youth through her National Cares Mentoring Program. This will help to keep our children safe, focused and on the right track. They need to know that they need NOT become Troy Davis but rather advocate for themselves, their peers and be the change they want to see in this world.

2. I will continue to promote and support Lisa Nichols - listed in Essence magazine as one of the 28 Most Influential Black Women-  and her Motivating the Teen Spirit program. Lisa helps young men and women and adults transform their lives, so those headed for trouble can turn their lives around, and those who want to achieve more greatness can get there like she did. Lisa is one of my  mentors and I will remain in the transformational conversation to make sure I stay grounded and growing as well.

3. I will press forward with my program; 3L: Lawyers, Leaders and Lunch which is designed to increase high school graduation rates of young black men and other youth, introducing them to careers in the legal profession and politics while in public school.

4. I will continue to support fatherhood programs, our children need their fathers at home, and if not at home definitely dads must be active in their children's lives. 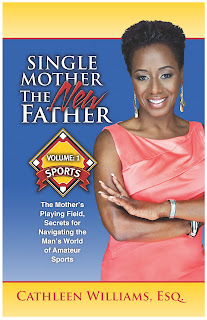 5. I will aggressively seek to reach all 10 million single mothers in the US alone with my talks and books for women, primarily single mothers. I will push and ask you to assist me in getting my book series, Single Mother the New Father, a vital book series that provides essential tips for women raising kids and holding up a household on their own.

6. I will continue to use my skills as an attorney and work with my peers colleagues, friends and organizations to prevent such a travesty of justice from ever happening again on my watch.

7. I will expand my efforts to showcase Great Men of Excellence each November 19, on International Men's Day so the world will see much more than the negative aspects of manhood, especially black manhood. Black men like men of every race are smart, talented, valuable, worthy of respect, and their fate shall not be determined by the prison system.

Yes, Georgia - look out because it's on like Popcorn. Those of us who were shocked last week by Mr. Davis' death will be mobilized to deflect that Cold Sweat we had when you injected the killer cocktail in Mr. Davis' arm.  We will  Get Up Offa That Thing because you can't keep us down- so get ready for The Big Payback! Death penalty, don't get too comfortable because those of us who are against you will not give up the fight. Troy Davis is dead, but death where is your victory? I for one was too trusting in the system and that it would work for Troy Davis. I know differently now and I'm ready this time. Death Penalty, Papa's (and Mama) Got A Brand New Bag and Papa Don't Take No Mess.